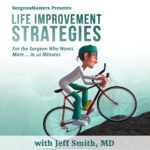 Last time she was on the podcast, we talked about Robyn’s documentary film Do No Harm which investigates the high rate of burnout and suicide among physicians and how it links to medical errors and patient safety. And with September being National Suicide Awareness Month, we thought it was the right time to bring her back for an extended conversation.

You would think that the medical field would hold itself to a higher standard when it comes to the health and well-being of its own. But in fact, the opposite is true. In general, it seems like people in medicine treat themselves and their colleagues with less regard for their well-being.

We’re focused so much on the “demand” and an assembly line model of care. But no one is focusing on the “supply” of physicians needed to take care of the demand. If we don’t address the supply (or doctor) side of the issue, patient care will suffer.

Doctors also face tremendous risk when bringing these issues to light. Administrators often see them as “complaining” or “rocking the boat.” As a result, many physicians don’t want to speak out for fear of losing their jobs. We need to educate both physicians and administrators about how to effectively address these issues.

The relationship between patients and physicians is eroding. Physicians want to spend more time with patients, but they’re being beaten down by this assembly line model of care. When patients see that they’re stuck in the same “assembly line” model, it really helps build back that trusting doctor-patient relationship.

What steps does Robyn suggest we do to address the systemic issues causing suicide in the medical community?

Email Robyn and the Do No Harm team: Info@donoharmfilm.com

Robyn Symon is a two-time Emmy Award-winner, and an accomplished writer, producer/director, and editor. She began as a television news reporter in Texas, then joined PBS in Miami where she hosted and produced documentaries, public affairs programs and the TV series Florida! (6 seasons; Travel Channel). She wrote and produced the docu-series “Voices of Vision,” which focused on the work of non-profit organizations worldwide. She has produced hundreds of hours of TV series for major cable networks including Discovery, CNBC, HGTV and currently produces a series on the Reelz Channel. Prior film credits include: “Transformation: The Life & Legacy of Werner Erhard,” acquired for international distribution by Screen Media Films and “Behind the Blue Veil,” about the ancient Tuareg in North Africa, which was distributed by Journeyman Pictures. Her most recent documentary—“Uncle Gloria: One Helluva Ride!” — is currently on the film festival circuit.